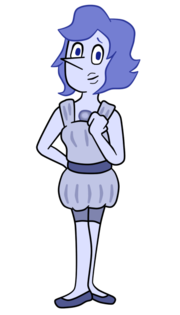 Moonstone Pearl is a gem made and owned by Periandlapis007.

Moonstone Pearl has a light bluey purple skin tone and a darker shade in her hair. She is thin and has a pointed nose like most pearls. She wears a blouse that reaches to her thighs and has a dark belt around her waist. Her gem is in the center of her chest.

Cave Pearl and Moonstone Pearl are married and have kids. They still help Celestite when needed however.

Due to her being a moonstone she was abused by her former owner, she eventually went to Celestite for help. They became close friends but over the years and as Celestite aquired more friends Moonstone Pearl was left behind,

Spear Summoning: She can summon a spear from her gem. It is long and pointed with two sharp points on the tip and a curved bottom. TBA

Retrieved from "https://steven-universe-fusions.fandom.com/wiki/Moonstone_Pearl((PAL))?oldid=22524"
Community content is available under CC-BY-SA unless otherwise noted.