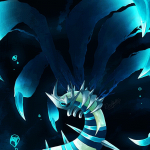 aka Your not so merciful God

So most of you here me know me so get on to leaving me a message (or not I mean talking to A.I. can get boring)