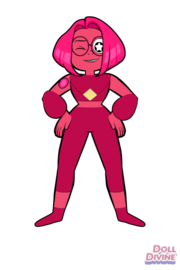 Coral is one of Periandlapis007,If someone wants to borrow it then you can use it IF you have no other Charecters yet.

Coral is a newer homeworld formed gem,So she doesn't have much history,but when she was first formed,she was formed on an abandoned homeworld kindergarten,she was there for a few hours until she met Moonstone (ISS).A few years after Coral became rebel because of not respecting Homeworlds ways,her and moonstone stayed together but later on when a war was forming on Homeworld they went back to homeworld to protect their homeworld friends. Weapon It is a yellow and red bomb that when it explodes the remains of the bomb will explode around the enemy making a much smaller explosion.The bomb is surrounded in water.

Can make holograms similar to pearls

Retrieved from "https://steven-universe-fusions.fandom.com/wiki/Coral((PAL))?oldid=22529"
Community content is available under CC-BY-SA unless otherwise noted.